In the 18th and 19th centuries, economists spent a lot of time thinking about what determined the division of income between land, labour and capital. As the importance of agriculture diminished, the question transformed into one of determining how income was distributed between capital and labour. The problem was difficult and an answer elusive.

Tens of well-known economics papers are therefore invalid. One thinks of such classics as Technical Change and the Aggregate Production Function by Robert Solow (1957) or Capital-Labor Substitution and Economic Efficiency by Kenneth Arrow, H.B. Chenery, B.S. Minhas and Robert Solow (1961). Real Business Cycle theory which makes use of similar production functions must also be disqualified for the same reason.

There is no denying that substitution between labour and capital can take place. A capitalist who employs 50 workers to manufacture shoes manually can set up an automated assembly line with five workers. But that substitution does not take place at the margin. Since it is not possible to disentangle the contributions of capital and labour in the final product, neoclassical economics is far from having found a solution to the question that exercised the minds of economists in the 18th and 19th centuries.

Both the capitalist and the worker can lay claim to the marginal product, which is a joint result of capital and labour. But the decision about how the rewards flowing from the marginal product are divided is made by the capitalist. He does not make it in a vacuum, though. If labour unions are strong or there is demand for the worker's labour from other capitalists the worker will get a greater share than otherwise. Similarly, if he has sufficient accumulated saving, he can hold out for a greater share whereas if he is asset-destitute he has to settle for whatever the capitalist gives him. The division depends on the balance of power between the capitalist and the worker. There are clear parallels between the marginal product of labour and marginal utility. In both cases, neoclassical economics invents a variable which has no basis in reality. Then it justifies this by constructing a function which it assumes to be differentiable, when, even by internal logic, there is no evidence of differentiability.

Looking back, it is astonishing how much of neoclassical economics is based on mathematical errors.

This may seem like the daydream of a fond old man. But I am confident that my new ebook Economics Redefined deals a death blow to neoclassical economics. I expect few economists to read it and fewer still to understand it. Even so, I expect that eventually it will become the conventional wisdom. Those who have been intimidated by the mathematics of mainstream economics -- the Lagrangians and the bordered Hessians -- will read this book and rejoice because it shows that the math is hogwash.

PREFACE TO THE BOOK

In September 2014, Jonathan Barzilai, a mathematician at Dalhousie University in Canada, wrote an open letter to William Nordhaus, who was the president of the American Economic Association at the time. Among other things Barzilai pointed out: "In economic preference theory, the claim that ordinal functions can be differentiated is based on elementary errors: Theorems of differential calculus are applied where the assumptions of these theorems are not satisfied and mathematical operations are applied where they are not applicable. The notion that ordinal functions are differentiable is an error. It has no parallel in mathematics and science."

Since a large part of economics rests on the idea of utility maximisation (which is untenable if Barzilai is right) his letter was expectedly not met with enthusiasm. To describe the response as a "deafening silence" might be cliched but quite appropriate and hardly surprising. His claim was after all akin to someone telling physicists that the law of conservation of momentum is incorrect. Nordhaus did not respond. If other economists took note of Barzilai's letter they probably regarded him as crazy.

Unfortunately for mainstream economics Barzilai is right. And it does not take much thought to arrive at that conclusion. If utility is ordinal, then three values of utility a, b and c are of the kind that we can say a > b > c and nothing more. The three numbers 3, 2 and 1 satisfy that ordering but so do 25, 3 and 1. Obviously the operations of differential calculus cannot be applied to them. That is all there is to it. It took me quite some time to realise this because, like most economists, I was thinking of baskets of goods as in indifference curves. Not being a mathematician but an engineer by training, I needed to think in pictures, and it was a couple of years before I convinced myself that Barzilai's argument applies to baskets of goods as well.

In June 2017, Real-World Economics Review, a heterodox economics journal, published a paper of mine where I showed that the demand curve must necessarily take the shape of a rectangular hyperbola, and that when this is the case, macroeconomics can be built from the microeconomics of heterogeneous agents, and that involuntary unemployment must follow as a matter of course. It was a month or so after this, while looking through old issues of Real-World Economics Review, that I first chanced upon two papers by Barzilai as well as a putative refutation of one of his papers, which was actually nothing of the kind.

Four years later, in a moment of transcendental joy, the realisation struck me that Barzilai's idea and mine, though seemingly oceans apart, actually amounted to the same thing. It is because utility is not differentiable that demand curves must be rectangular hyperbolas.

I hope the reader of this book too will be able to savour the joy of that realisation.

A summary of the book is as below:

Chapter 1 shows that the mathematics of profit maximisation is incorrect.

Chapter 2 shows that the mathematics of utility maximisation is incorrect.

Chapter 3 uses the ideas of the previous two chapters to arrive at a non-equilibrium macroeconomics derived from the microeconomics of heterogeneous agents and having involuntary unemployment as a key feature.

Chapter 4 explains how our conception of money is different from that of Keynes and Friedman.

Chapter 5 shows that the idea of the money multiplier is incorrect.

Chapter 6 sets out a way of measuring money.

It's been quite some time since I have commented on this blog.

Now something important has happened.

For the first time since 2006 the growth in Corrected Money Supply (my measure of money) has dipped below 0%.

It first went below 0% in June 2018 (using the latest figures from the St Louis Federal Bank web site. The data keep getting revised for several months which is why my previous post did not capture the fall below zero.) though it was above 0% in June 2019, the latest I am able to calculate.

In September 2006 CMS growth fell below 0% and continued to stay below until August 2007. The Great Recession began in December 2007.

It is to be seen if this time is any different. 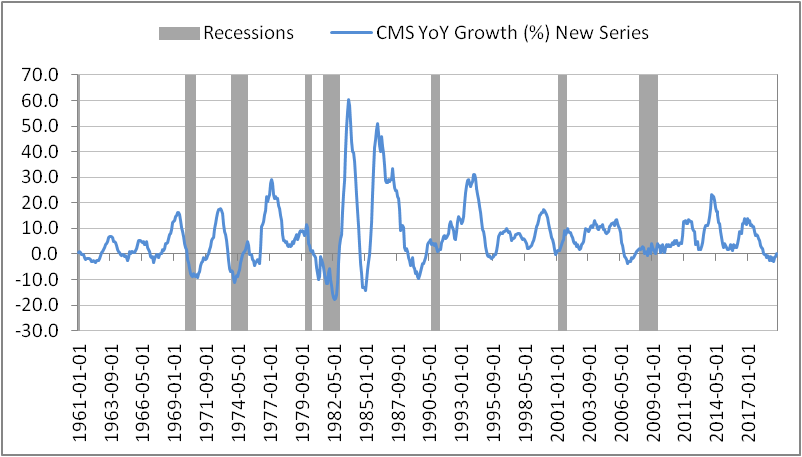 How long will the good times last?

Lest the headline surprise some readers I must clarify that I am referring to the US, not India.

Last week, in a column in the Washington Post Matt O'Brien wrote:

"This is the kind of economy that central bankers dream about.

"No, really, they had to dream about it. That's because, other than the late 1990s, we've never seen the confluence of so much positive economic news like we are now. Unemployment, after all, has just fallen to an almost-50-year low of 3.7 percent, and wages are still rising at a more respectable rate of 2.8 percent -- but despite all that, prices have only gone up a restrained 2.3 percent the past year."

In response to the good news, the Fed raised its benchmark interest rate in September 2018 and hinted at one more this year and three in 2019.

How long will these good times last?

The figure below shows the growth rate of Corrected Money Supply (CMS, my measure) since 1961. A month ago the US Bureau of Economic Analysis radically reworked data for a host of measures such as personal consumption expenditure and the personal saving rate. The chart for CMS growth uses the new data. As can be seen, whenever CMS growth falls to zero, it is usually the cue for a crash in one or more asset markets and a coming recession or mini-recession. 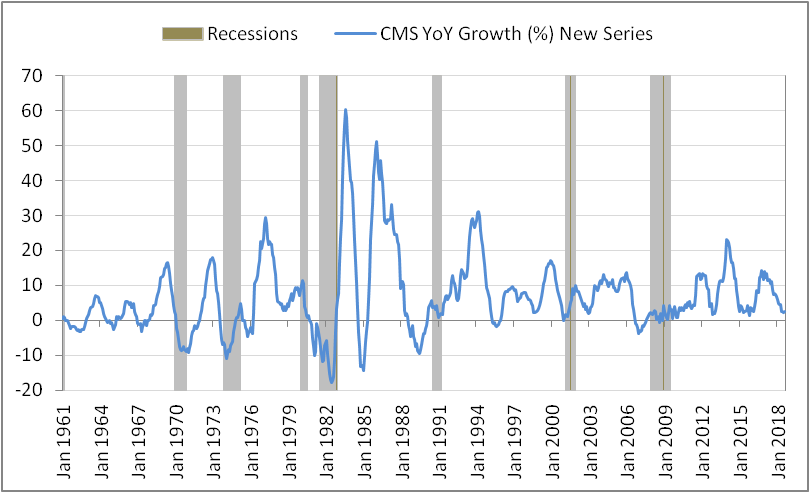 In 2015, when CMS growth came close to zero and stayed there for some time there was a mini recession. After that, the CMS growth rate again rose much above 10%.

Since the beginning of 2017, however, CMS growth has been falling steadily and it is now hovering around 2.5% (the figure is for August 1, 2018). The rate hike in September has probably pushed the growth rate of money supply further down.

At the moment, one can safely say that the Fed's plan for three more rate hikes in 2019 will not materialise. The US economy will go into a tailspin much before that.

This blog, which focuses mainly on money supply (using my own measure) has been silent for more than a year.

The reason was that there was little to write about. Money supply growth which had fallen steadily from a high of 22.4% YoY in February 2014 to 0.9% in October 2015 went into reverse gear and rose rapidly.

Since July 2017, however, money supply growth has been again falling. At the end of January this year it stood at 11% and seems poised to fall further when the Fed Funds Rate is raised again. As the graph below shows, when money supply growth draws close to the 0% mark, nasty things begin to happen. We are a long way above that right now. 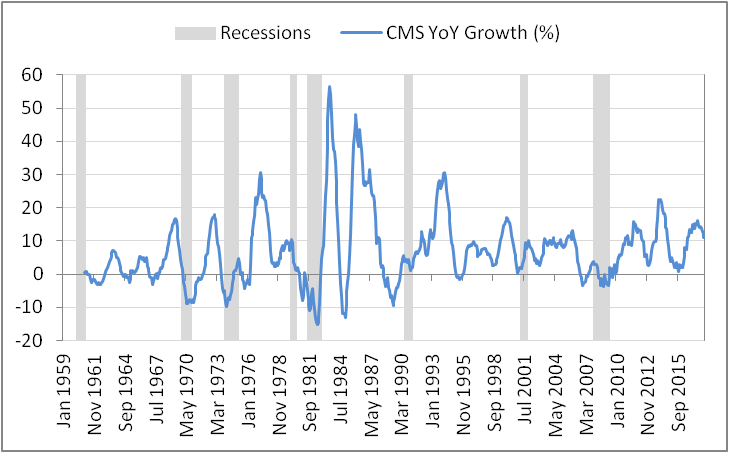 Since my previous blog post three of my economics papers have been published in Real World Economics Review. Their titles and links are as below:

1. The mathematical equivalence of Marshallian analysis and "general equilibrium" theory
2. A diagrammatic derivation of involuntary unemployment from Keynesian micro-foundations
3. Does the maximization principle break down during recessions?

Philip George
Understanding Keynes to go beyond him